As every cheek-pinching grandmother knows, a growing baby is a healthy baby. But how do you know if your child’s growth is on track? Enter the baby growth chart, the major tool your pediatrician uses to plot baby’s physical development—including weight, length and head circumference—at every wellness checkup. The baby growth chart may look intimidating, with its dots and curves and height and weight percentiles, but it’s easy to decipher with a little background and the help of your doctor. Here’s what you really need to know about tracking baby’s growth.

Those curves you see on a baby growth chart reflect average growth—in weight, length and head circumference—for boys and girls based on their age. At the wellness checkups, the doctor will weigh and measure baby (before age 2, the doctor will stretch baby out on the exam table to measure length), then add a dot to the graph to plot your child’s latest gains. The curve is just those dots connected over time.

How often is baby’s growth measured?

Doctors will whip out the measuring tape and place baby on a scale at every checkup, which means at birth, after 3 to 5 days and at months 1, 2, 4, 6, 9, 12, 15, 18, 24 and 30, then annually after that. The main thing your doctor is looking for is consistency. “Do I care about the absolute number on the chart? No, I don’t,” says pediatrician Charles Shubin, MD, director of the Children’s Health Center at Mercy FamilyCare in Maryland and associate professor of pediatrics at the University of Maryland and Johns Hopkins University. “What’s important is the pattern of growth—how they’re progressing.”

Should you track baby’s growth at home? The short answer: Don’t bother. Dr. Shubin had one mother who measured her child every week and was proud to show off the hand-etched lines up and down the doorjamb. But this is entirely unnecessary, Shubin says.

“Children get measured at every checkup, on the same scale, in the same way, so we get the most accurate weight,” says Karen E. Breach, MD, assistant specialty medical director of Carolinas HealthCare System in North Carolina. And if the doctors are the least bit concerned? “We’ll schedule extra weigh-ins if we’re worried,” she says. “Seriously, the best way to monitor your child’s growth is to come to the well checkups.”

What do height and weight percentiles mean?

Baby’s height and weight chart percentile reflect how she compares with average babies— lower numbers mean she’s on the smaller or lighter side, and higher numbers mean she’s on the taller or heavier side. So if there are 100 babies and your child lands in the 40th percentile for height, that means that 39 babies are smaller and 59 babies are bigger. But keep in mind, it’s not a contest. “Bigger isn’t better and smaller isn’t better,” Breach says. “When parents ask why their child isn’t in the 95th percentile, I remind them that it’s not a score on a test.” Instead, baby’s growth will reflect your own family’s stature and how much baby is eating—and it’s more about the amount than whether baby is getting breastmilk or formula.

That’s easy: “What’s normal is what’s normal for your child,” Breach says. “It doesn’t matter that your cousin’s baby is bigger or that the neighbor’s baby is smaller. What matters is if your baby is growing on his chart.”

Normal growth means baby’s measurements—height, weight and head circumference—are showing gains at every appointment. Whether boy or girl, breastfed or formula-fed, steady development is what’s important. “If your baby is 25th percentile in weight and suddenly shoots up to the 95th percentile, I’m going to worry that he’s being overfed,” Breach says. “If he’s been measuring in the 25th percentile and then suddenly he’s down to the 3rd percentile, that could also be a problem.” If baby is born preterm, doctors will use a gestational age adjustment to plot her numbers.

During the first two to three months, breastfed babies may gain weight more quickly than their formula-fed peers. That’s likely because breastfed babies may eat more often—they’re probably nursing on demand rather than by a schedule—and moms aren’t measuring how much milk they’re getting. “There are lots of reasons that breastfeeding is healthier, but there really isn’t a big difference in growth rates,” Breach says.

The American Academy of Pediatrics recommends using the World Health Organization’s (WHO) growth chart for babies from birth to 24 months. The WHO chart, officially called The WHO Child Growth Standards, was developed in 2006 based on optimal growth rates for mostly breastfed babies in the US and Europe. “It was initially used for breastfed babies, but it’s really for all babies,” Breach says.

After baby reaches 24 months, pediatricians may continue to use the WHO growth charts or switch to the baby growth chart developed by the Centers For Disease Control and Prevention (CDC) for ages 2 to 20. According to Breach, they’re comparable after age 2. 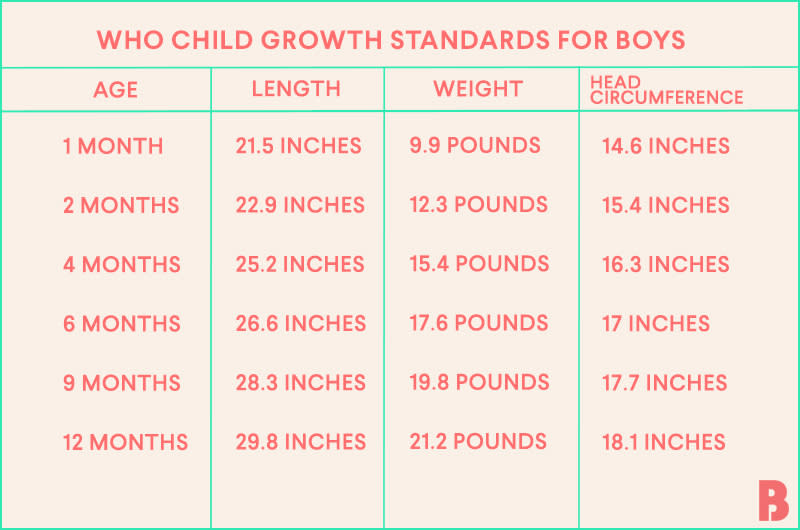 The WHO baby girl growth chart below describes ideal growth patterns for baby’s length, weight and head circumference within the first year of life. 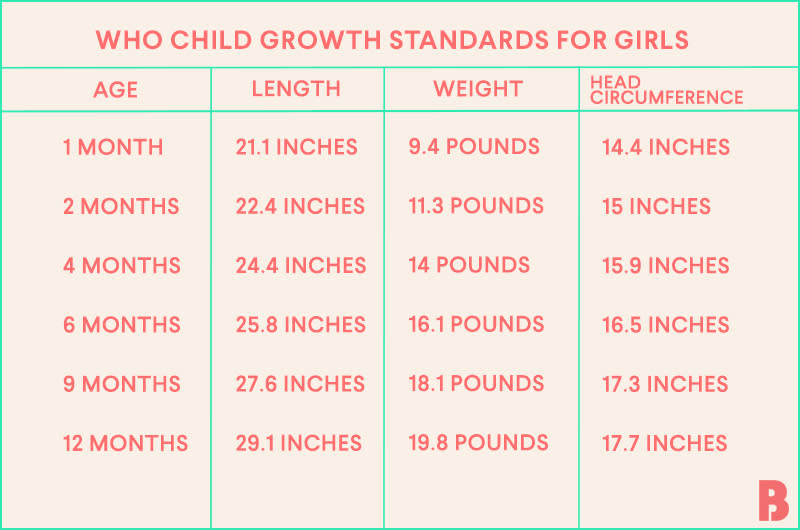 Your doctor is in the best position to track baby’s growth, but definitely speak up if you’re concerned. Here’s how pediatricians are likely to address baby’s position on the growth chart relative to the standard curve.

If baby is underweight

“It’s not the same as not growing,” Shubin says. If baby is measuring on the low side for weight but is still growing well, there’s probably no problem, especially if the family tends to be thin. If baby’s weight is either significantly below average or baby is not growing well, doctors will look at whether baby is eating enough. “Typically, underweight infants who are otherwise healthy are usually just underfed,” Breach says. If they’re eating enough but still not gaining weight, doctors will look for an underlying medical condition such as celiac disease, a thyroid problem or cystic fibrosis.

If baby is overweight

This is usually a simple case of overfeeding, especially with babies. Both Shubin and Breach are seeing more and more overweight babies—who are likely to grow into overweight adults. “My goal is never for them to lose weight but to gain weight at a slower pace as they grow,” Breach says. “We don’t put kids on a diet.” Most babies slim down anyway as they get more mobile and start to sit up, pull up, roll, crawl and walk. Very rarely, too-rapid weight gain can be associated with health problems, such as an endocrine disorders. Talk to your doctor if you’re concerned.

If baby is growing too quickly

Just being tall isn’t a cause for concern, especially if Mom and Dad are tall. “When a child is consistently above the growth curve, I always say, ‘What do you think Shaquille O’Neal looked like at that age?’” Breach says. If baby is growing steadily and then makes a sudden jump, you may be referred to an endocrinologist.

If baby is growing too slowly

Again, petite is not a problem (especially if it runs in the family), unless baby is not growing a minimum of one inch per year or if the growth curve is flat or dropping. In those cases doctors will likely test for fixable issues, such as growth hormone deficiencies or problems with absorbing nutrients (like celiac disease).

Ultimately, when it comes to tracking baby’s growth, the pediatrician is on it. “I don’t think any question is a silly question, but my key take-home message is: Don’t try to manage this yourself,” Breach says. “Children are models of their family, so big people have big children and small people have small children.” Your job, she says, is to offer a healthy diet, and then just relax and enjoy time with baby.

Plus more from The Bump, What You Need To Know About Baby Growth Spurts:

The Moro Reflex: What Makes Babies Startle and How to Calm the Reflex

How to Address Your Child’s Developmental Delay During the Pandemic

14 Baby Exercises to Get Your Baby Moving

Why Does My Baby Keep Pulling Tupperware Out of Our Kitchen Cabinets?

Why Babies Pull Their Legs to Their Chest

How to Prevent Plagiocephaly (Aka Flat Head Syndrome)

Moms May Be Able to Smell Their Child’s Development, Study Says

Hiccups May Be Necessary for Newborn Brain Development, Study Finds 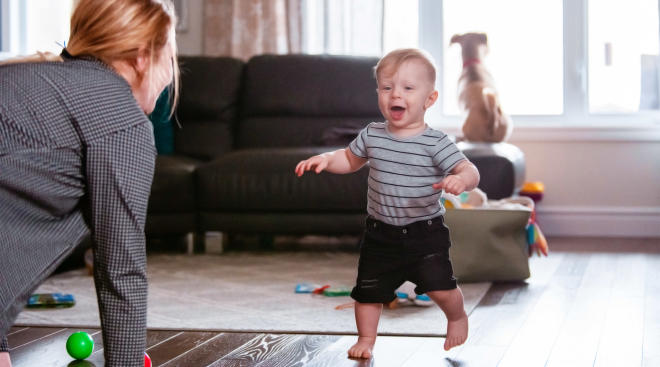 Toddler With ‘Irreversible Brain Damage’ Stands for the First Time 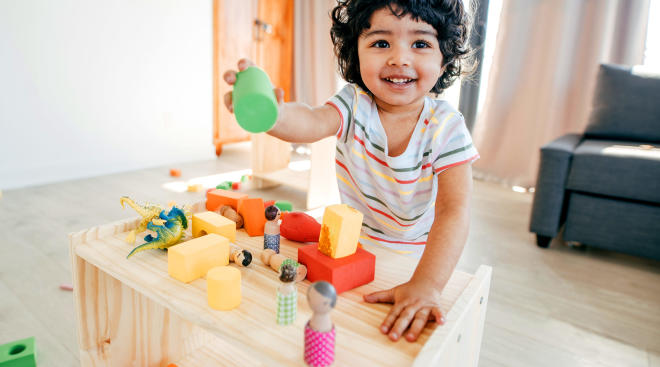 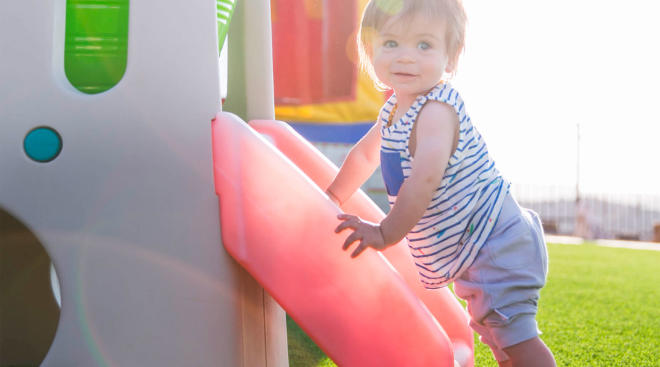 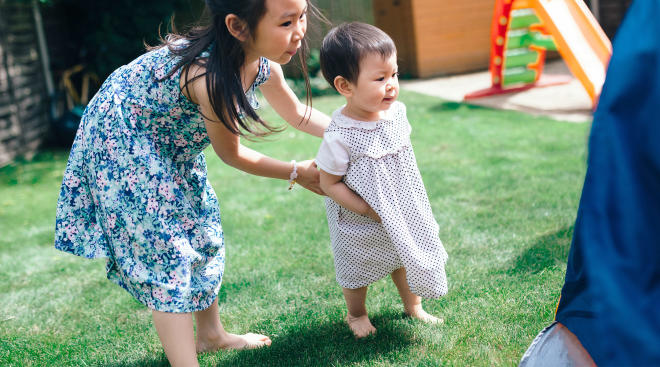 The Three Lifestyle Habits Kids Need to Live a Healthy Life, According to WHO 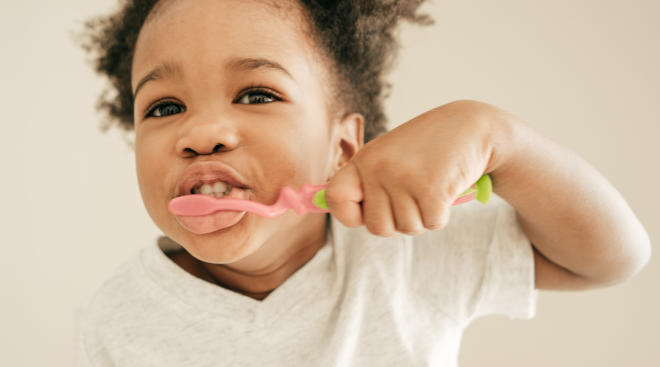 Many Preschoolers Need to Change the Way They Brush Their Teeth, CDC Says